Software sizing: how to measure the size of software not taking technology into account?22 November 2018Next

Software projects: What is the impact of staff turnover on budget?

Not that long ago, a friend of mine, who is project manager for a large company, was complaining about never being able to complete a project for his organization. The reason behind this is that he is usually transferred from one project to another, depending on priority changes. Recently, another acquaintance of mine was wondering about how to evaluate the impact of team changes on the proceedings of the project. According to her, such changes involve significant consequences, but she does not know how to evaluate them.

Companies are said to be more agile and they wish to become able to regularly change priorities. Those changes bear consequences, everyone knows it, but how can we evaluate them?

A simple method was created to answer that question: CoCoMo (Constructive Cost Model). There is a model which enables to estimate the effort of a software project depending on several parameters. That model was conceived by Barry Boehm and his team, and it keeps evolving at USC, the University of South California. The calibration has been done on a large number of projects.

The equation of CoCoMo is as follows: 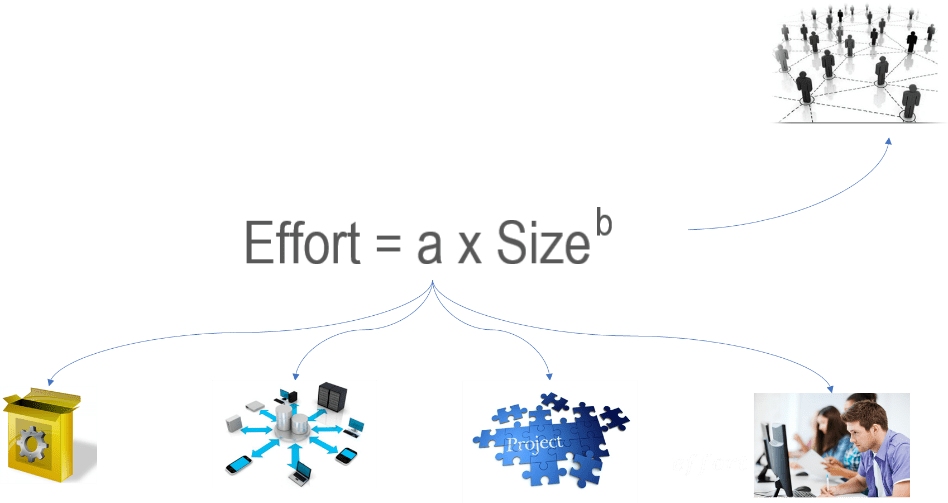 Coefficient b is close to 1 and gathers influent factors in relation with the organization’s maturity.

Coefficient a gathers influent factors in relation with the product, the platform, the project and the team. Amongst the factors that are related to the team, there is “PCON”, that stands for Personnel Continuity. The PCON parameter is a multiplication factor of the effort that varies from 0.81 to 1.29 depending on the stability of the team.

Thus, we can deduce which type of impact the turnover has on the effort of the project. 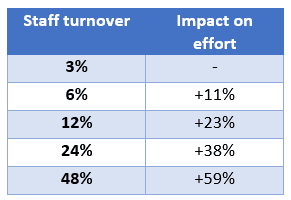 So, if half the team changes each year, the project will cost around 60% more than with a team that remains unchanged, with equal competences.

But let’s imagine that the staff is being replaced by less qualified employees with less experience, the impact would then be as follows: 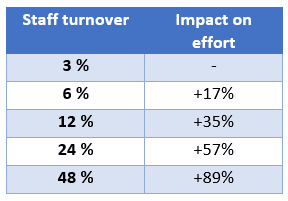 On an initial examination, we can consider that the additional charge (in %) of the project is two to three times the turnover (in %).

This data is given as an indication, since they can vary from one context to another, but they give an order of magnitude. We are now aware that agility has a cost, but it might be better sometimes to wait a few months to eventually cut expenses and deliver faster.